x Thank you for submitting an inquiry. We will get back to you as soon as we can. Atlas Trekking Morocco
x
x

This full day tour from Marrakech to Ait Ben Haddou Kasbah and Ouarzazate requires an early start, about 7h 00 am with approximate return time to Marrakech around 6h pm. The tour will wind through the High Atlas Chain passing through the open mountain pasture of the Tizi N Tichka pass, known as the “Gateway to the Sahara” so you will be able to enjoy beautiful landscapes with local villages and elevated scenery of the surrounding areas during your journey.

After crossing the pass you will notice a dramatic shift in the landscape changing to a more arid and desert terrain and the countryside becomes barren and rocky and the landscape predominantly colored by the red clay soil of the area. Then you will have the opportunity to visit the lost castle of Kasbah Teloeut (optional). 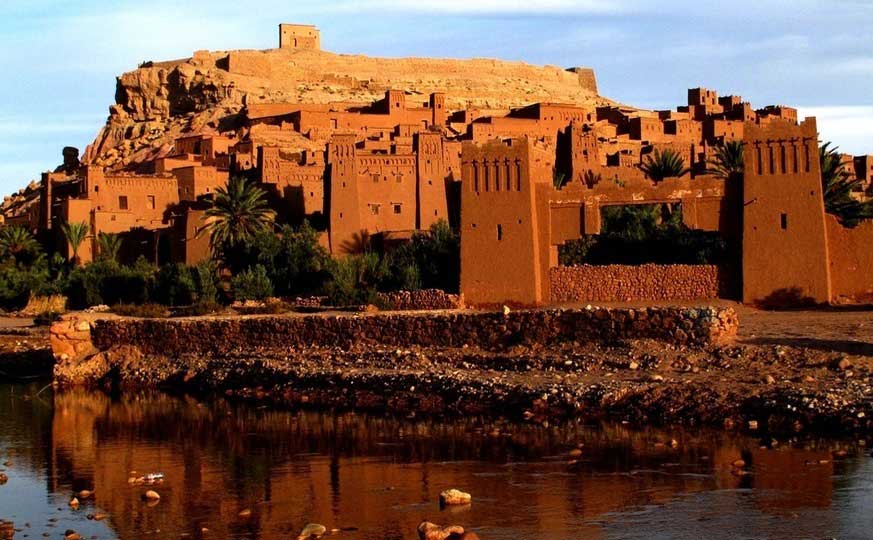 This forgotten Kasbah holds a labyrinth of opulent rooms. Maintaining a ghost of the splendor and glory of what it once beheld. Then you will continue driving through the amazing Onilla valley which was once a major caravan trading route to reach The Ksar of Ait Ben Haddou. The best example about the greatest berbere architecture – a photographer’s paradise.

On the afternoon we will have the chance to explore “Ouarzazate”. Which is a large city and is the capital of the Ouarzazate Province. It has a beautiful medina typically constructed with the local red clay and it lies on the threshold of the Sahara. Sometimes known as the ‘African Hollywood’ it is home to the Atlas Studios, which you can also visit. One of the largest film studios in the world, where epic films such as the ones mentioned above, are made.

You may also want to visit the Taourirt Kasbah. A magnificent palace built in the 19th century. Of some 300 rooms which would have housed some of the family and their servants of the infamous el Glaoui. Who backed by the Colonial French government. Controlled the caravan trade routes to West Africa and ruthlessly suppressed local rebellions.

From marrakech to Ait Ben Haddou at a Glance:

* This Day trip runs all year round and can depart at any date of your preference.
* We usually have several trips departing each week that you may join if you are a solo traveler,

please get in Touch for more info !!.

* This Day trip runs all year round and can depart at any date of your preference.
* We usually have several trips departing each week that you may join if you are a solo traveler,  please get in Touch!!.