x Thank you for submitting an inquiry. We will get back to you as soon as we can. Atlas Trekking Morocco
x
x

Discover the Moroccan imperial cities and Sahara Desert on this paced and adventurous tour. the kingdom contains a multitude of cultural influences. From the Roman empire, through Arab conquest, to its French protectorate status in the 20th century, Morocco has formed its own, highly unique culture through absorbing the influence of its conquerors and visitors. Well-preserved medinas throughout the country hearken back hundreds of years with their maze of streets, sidewalk market stalls, and hidden courtyards. 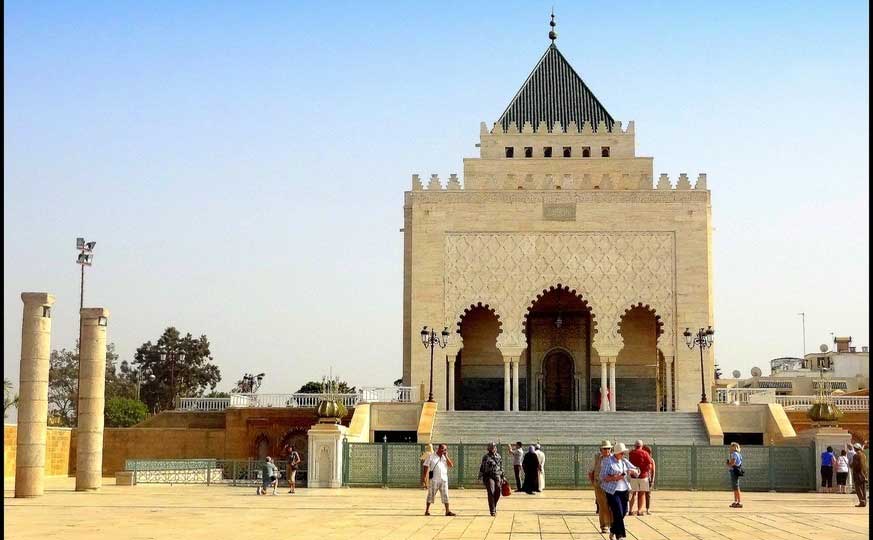 Morocco imperial cities tour will allow you to experience vibrant souks, medinas and ancient Roman ruins. Hike through gorges in the towering Atlas Mountains and interact with local friendly Berbers.  Ride camels and explore the edge of the Sahara Desert.

Morocco Imperial Cities and Sahara Desert Tour at a Glance:

Join tour in Casablanca. Arrival Day and Welcome Meeting by our expert tour leader. Complimentary airport transfers are provided for clients arriving on this day. Optional visit to the fabulous Hassan II Mosque before we set forth along the coast heading north, towards Rabat, the city that was established as the capital of their protectorate by the French in 1912 and since independence has served as the capital of a modern Morocco.

This morning we will have the opportunity to explore something of the city's historic heart, a guided walking tour of the area around the Hassan Tower and the Mausoleum of Mohammed V, before wandering through the engaging Kasbah des Oudayas, originally a fortified town that is now infused with a distinctly Andalusian flavor. After taking in the sumptuous grandeur of the Royal Palace we will continue our journey on the afternoon to the country’s cultural capital, Fes.

We have a full day today to take in the artisan capital of Morocco and during the morning's sightseeing we will have a chance to take in the mosques and souks of the Fes el Bali, view the Royal Palace and drive out to North Borj for some great views back across the city. Craftwork made and sold in the Fes medina is considered amongst the finest in Morocco and a wander through its artisan districts reveal weavers, coppersmiths and tanners, producing beautiful pieces much as they have for generations. Beautiful buildings abound in this city as well, including the Sanctuary of Moulay Idriss 2nd, the Karouine Mosque and the Al Andalus Mosque. After lunch our exploration of the city continues with a tour of Fes El Bali (Old Fes), exploring the souks in the backstreets, wandering past the spice stalls and taking in the opulent majesty of the 14th century Attarin Madrasa, whose intricate decoration and elegant design makes it one of the city's most captivating medieval colleges.

Leave Fes to explore the ancient Roman ruins, at Volubilis the capital of the Roman province of Mauritania Tangitana. The detailed mosaics here are still intact and the site gives a good idea of the layout of provincial settlements, after a local visit of the area with a local site guide we drive through spectacular landscapes toward the magnificent imperial city of Meknes where we enjoy a guided tour of the major highlights of the city, including the old granaries of the Heri es-Souni and the Mausoleum of Moulay Ismail.

Turning south today we climb steadily into the dramatic landscapes of the Middle Atlas, heading first towards Ifrane, also known as "Switzerland of Africa". Driving near the small mountain village of Azrou, which in the Berber tongue translates as 'the rock'. This is the land of the fiercely independent Berbers, the Lords of the Atlas, whose traditions and ways still hold sway up here in their mountain strongholds far away from the cities below. The Berbers present us with a unique view of a way of life lost to the rest of North Africa, where music and dance, even language and religion, are far removed from their Arab neighbors. Continuing into Berber sheep raising country we head to Timahdite and over the Col du Zad, before crossing the Tizi N'Talghemt Camel Pass and continuing via the Ziz Gorges, then to Er Rachidia which is a must in the way to the bulk of Tafilalet until the palm grove of Erfoud “fossils area” then to Merzouga which lies on the edge of Erg Chebbi, an area of spectacular high dunes that are amongst some of Morocco’s most spectacular natural landscapes. Here we start a camel ride trek crossing the sand dunes to reach our desert camping in traditional Berber-style tents to truly appreciate the captivating tranquility of this desert setting.

Early weak up, just prior to sunrise, then camel trek back to the Auberge in Merzouga, exploring the spectacular sunrise between the Dunes. After breakfast, leave the southern desert behind and head for the mountains once more. Following an ancient route along the southern slopes of the Atlas, we reach the town of Tineghir, our base from which to explore the towering vistas of the Todgha Gorges. Driving westwards through El Kelaa des M'Gouna positioned at the foot of a rocky outcrop that separates the Dades and Mgoun Valleys. Famed for its roses, the town lies blanketed under a landscape of scented blooms each spring, which are then harvested in May during the famous Festival of the Roses and processed into rosewater to be sold throughout the Islamic world. Finally, we reach our overnight place at the impressive Skoura palm grove.

Today we drive crossing the Valley of a Thousand Kasbahs, where each of the oasis towns can boast their own distinctive character, the mud and straw structures becoming more plentiful and more ornate as we progress along the valley. After exploring Ouarzazate the Africa’s capital of cinema we make our way towards the small fortified Berber settlement of Ait Ben Haddou, which has been classified by UNESCO as a World Heritage Site and considered by many to be one of Morocco's most picturesque settings. Studded with crenellated towers and richly decorated, the town's Kasbah is quite spectacular and provided an ideal location for filming scenes from Jesus of Nazareth and Lawrence of Arabia. After lunch we continue through the impressive Tichka pass (2260m) toward our mountain village at the feet of the highest peak in North Africa the Toubkal summit 4167m high in the heart of the high Atlas Mountains.

We have a full day today to take in the heart of the mountains, about 4 hours guided trek around Berber villages, possibility for a mule ride exploring mountainous and rural valley of Imlil at the feet of the Toubkal summit. It is the highest peak in North Africa (4167m) high, varied nature in the heart of its colorful terrace cultivation valley, The Berbers who live on the mountain slopes are used to fight hard against the harsh winter climate, and their hospitality is legendary. Late afternoon short transfer to Marrakech.

Today has been left to explore the red city that has for centuries been a meeting place for the mountain Berbers and the desert peoples of the south. This morning we take a sightseeing tour of Morocco's fascinating Red City. Like many North African towns, Marrakech is divided into two distinct parts, the Gueliz (the modern French-built city) and the Medina (the Old City), a place where trade and barter amongst the colorful souks still renders its ancient heart a glittering cacophony of noise and colors. Journeying into this vibrant city with a local guide affords a chance to discover some of its most enthralling sites. The city's beating heart is the spectacular Djemma-el-Fna, a site not to be missed and a scene straight out of the pages of the Arabian Nights. Here you will find the streets and alleys alive with storytellers and musicians, jugglers and acrobats, snake charmers and clowns. Marrakech is a city like no other, boasting a staggering array of spectacular architecture and wonderful facades and not to be missed are the Koutoubia mosque and tower, Saadian tombs, Ben Youssef madrasa, the Dar Si Said Palace (now the Museum of Moroccan Art) and the Menara gardens. This evening there is also an opportunity to visit a traditional Hammam. Meals:  B           /         city guide tour        /         Riad / Hotel